Have you ever been fascinated by the lines on your palms? You are not alone - palmistry has intrigued us for centuries as a way to further explore our personalities!

Palmistry, also known as chiromancy, is a respected form of divination where the markings on our palms, the shape of our hands and the length of the fingers (among other qualities) are used to reveal more about our personalities and even to predict future events.

While the history of palmistry is unclear, it’s been used for centuries as anything from a parlor game to a very intense interpretation of one’s life and spiritual progress. Both palmistry and the tarot have their roots in astrology, as the lines and mounds on your hand have names that directly relate to the planets and celestial orbs. It’s how these lines and mounds form that make your own palm completely unique from everyone else!

A complete interpretation of palmistry is divided into several different sections.

These all tell a tale—and to get the full story, both palms need to be examined.

When you think of a palm reading, you probably think of having the lines on your hand interpreted, and you’d be right, but that’s not the whole picture. The lines do reveal a lot, though. There are four main lines to look at:

Not everyone has a fate line (and no, that doesn’t mean they don’t have a destiny). These lines can have other lines connected to them or braided through them. The way that these lines present themselves reveal a lot about your personality and events in your life.

The fingers of the hand are given names of the planets: 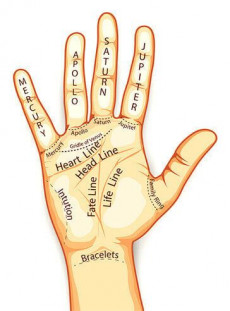 The thumb is treated rather differently. It’s not interpreted with the rest of the fingers but it is given it’s own set of characteristics and meanings. It is not associated with a planet, although the big fleshy part of your hand where the thumb joins it before going into your wrist is called the Mount of Venus. The big fleshy part opposite that is called the Mount of the Moon. The dip in the middle of your palm is referred to as the Plane of Mars. This also has two smaller areas; Upper Mars is to the left of the Mount of Mercury, and Lower Mars is between the index finger and the thumb.

Palmistry is both an intricate and a fascinating study. Like so many divination tools, it’s something that is easy to pick up. All you need is a palmistry guide, and a pair of hands! The more you learn and practice reading people’s hands, the more nuances you’ll discover, and the more fascinating the art of chiromancy becomes.

Want to Know More About Palmistry?

The Chinese Zodiac is made up of 12 animals, each of which corresponds to a certain year. In Chinese Astrology, it is believed that you have the same characteristics and… Read Full Article »

Palmistry is a largely misunderstood art; it is an observation of the predictable lines and patterns on the hand that display characteristics of a person’s personality. The… Read Full Article »

This article focuses on the fourth and final trine in the Chinese Zodiac and how it links to palmistry.  The fourth trine consists of a group of animals who are known as the… Read Full Article »