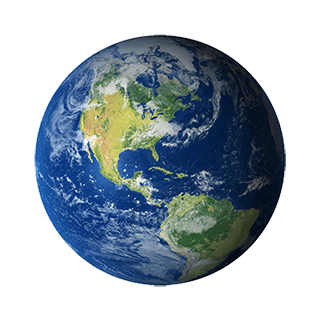 Named for: Terra, Latin for “the ground”

Welcome home, fellow Earthlings! As the largest terrestrial planet, and the only planet with liquid water, abundant oxygen, an atmosphere, and a habitable surface temperature, we are very lucky to have our Mother Earth. She makes it possible for us to exist at all.

The Earth frames the rest of the solar system, the galaxy, and the Universe from a very specific and totally unique perspective as she orbits the Sun. Although Earth is not viewed in the same ways as the other planets in astrology, she too influences us every day as we interact with the myriad of environments she offers: jungles, prairies, mountains, deserts, oceans, and arctic tundras. The rest of the planets appear in aspect to where the Earth is as she moves along her elliptical orbit around the Sun with the other planets. So, even though she isn’t included in natal charts, make no mistake: our home planet of Earth has a massive effect on all who inhabit her.

Earth’s glyph, seen above, is a cross inside a circle. The circle is meant to represent spirit, the totality of Universal energy. It is eternal and goes on infinitely. The cross symbolizes the physical realm of existence. The circle contains the cross, so Earth’s glyph is a visual representation of physical matter and existence being contained within the infinity of the energy of the entire Universe.

In the zodiac signs, the element of Earth manifests itself in the following traits:

The Masculine & Feminine in Astrology

While your career is only one facet of your personality, finding a career that fulfills you can do wonders for your mental and emotional help. When you feel aligned with what you… Read Full Article »

The Ultimate Guide to Reading Your Birth Chart Like an Astrologer

Have you heard the term natal chart or birth chart being thrown around lately!? What’s your initial/immediate reaction to this word? All you Astro geeks and amateur astrologers… Read Full Article »