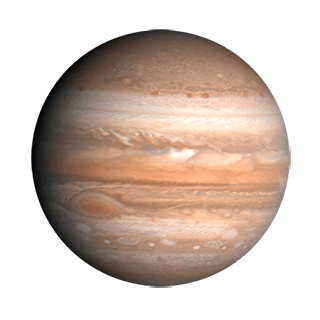 Named for: The Roman King of the Gods (Greeks referred to as Zeus)

Colour: The clouds make the planet look like it has red, brown, yellow, and white stripes.

Year Discovered: Known by the Ancients

Jupiter has some big shoes to fill when it comes to his namesake, the Roman King of the Gods, better known to most by his name in Greek mythology, Zeus. And, as the biggest planet in our solar system (twice as large as all the planets, combined), Jupiter is the perfect fit for those shoes.

You might think a gas giant with essentially no surface area wouldn’t have much going on, but you’d be wrong. For one, Jupiter’s 4 huge moons (and many other smaller ones) makes up what looks like a small solar system in itself. One of these moons, Europa, is thought to be a likely host for life. And, in proper kingly fashion, Jupiter is adorned with a series of anywhere between 6 and 9 spinning storms, arranged in such a way that its earned the nickname of Jupiter’s String of Pearls. The Great Red Spot, Jupiter’s famous storm, is twice Earth’s size and has been raging on for over 300 years now.

As the largest planet, Jupiter is fittingly known as the planet of abundance, luck, and expansion. Basically, anything to do with growth and prosperity is his terrain. The placement of Jupiter in the natal chart determines the ways an individual will experience growth, expansion, and luck, and in what particular areas of life. In other words, Jupiter points to our natural talents and abilities. Jupiter is telling of one’s tendencies towards travel and higher learning. He also indicates one’s willingness to take risks and other grand actions in pursuit of something more, whatever that something may be.

Similar to the ones we can see in the northern hemisphere of our world, Jupiter creates its own constant auroras that have more energy and are much larger than the auroras on Earth. Take inspiration from this! Jupiter is the one to watch when you’re working on manifestation. Because he is so far away from the Sun and therefore takes much longer (just over 1 Earth year) to complete a rotation around the Sun, most professional astrologers look to the aspects of Jupiter and how he interacts with what surrounds him at the time to determine how luck and manifestation will flow. As a rule of thumb, though, you’re likely to experience your luckiest times when Jupiter is in a sign of the same element as in your natal chart. For example, if your Jupiter is in Libra, you’ll probably find yourself luckiest when Jupiter hangs out in any of the Air signs.

Love Compatibility When Venus Enters Virgo: Time to Get Real

Venus is having her fun with us this month! We’ve been saying since Summer began that July 2015 was going to be a big month for lovers, and many of you are probably already… Read Full Article »

Greetings, Earthlings! We have another exciting week from the Universe this week. We are coming off of a week where there weren’t too many major activities happening in the… Read Full Article »

What It Means When the Moon is in Your Sign

The Moon spends about 2 1/2 days in one sign and will be in your Sun sign every month for about 2 1/2 days. But… what does this mean for you? The Moon is the planet that moves… Read Full Article »