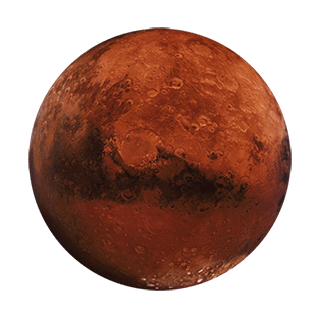 Ruler of: Passion, Ambition, & Will

Named for: Mars, The Roman God of War

Earth’s bright red neighbour, Mars, is on track to play host to the first human settlement beyond the Earth within our lifetime thanks to NASA scientists and engineers. Evidence suggests that there may have been life on Mars 3.7 billion years ago, when its surface was watery and its atmosphere moist. Today, the search continues for signs of past and current life on the Red Planet.

Named for the Roman God of War, Mars commands our attention from his seat in the solar system. It only makes sense that his planetary influence drives our passions, our physical energy, and the force with which we live our lives. As a Warrior, Mars is especially connected to aggression: how quick-tempered we are and how that temper is expressed. Do you let your feelings bubble under the surface until they boil over and you lash out suddenly with verbal venom? Or do you have a propensity for more immediate physical reactions, like crying or shouting?

Depending on what zodiac sign Mars is travelling through on a given day, we Earthlings will feel shifts in our energy; for example, when Mars hangs out in Leo, we feel more energetic, enthusiastic, and quick to react impulsively. We work towards our goals with vigour and purpose. In romantic situations, Mars in Leo boosts our confidence. On the other side, Mars in Taurus is much slower to get worked into a lather, and forward progress takes a slower, steadier approach.

Whether you’re loud, stubborn, and quick-tempered or shy, relaxed, and reserved depends on where Mars was travelling when you were born. Mars’ placement in your natal chart natal chart determines what spurs you into action, and what that action looks like for you as an individual.

From March 8 to July 10, Jupiter is in retrograde in the sign of Scorpio. On March 13, the Sun in Pisces trines Jupiter in Scorpio. Wondering what that mouthful of words means?… Read Full Article »

Are You Prepared For Eclipse Season?

While there are different types of eclipses that bring certain energy, there is one thing that each eclipse has in common: change. Whether we’re dealing with a partial, total,… Read Full Article »

Capricorn season 2022 has more than the usual planetary presence. The skies are gearing up for a whole lot of action, and so are we! All of the cosmos decided to flock together in… Read Full Article »