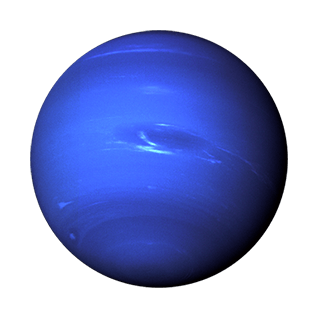 Named for: Neptune, the Roman God of the Sea

Ruler of illusion and the subconscious, mysterious Neptune is the only planet that cannot be seen from Earth with the naked eye. Neptune serves to remind us of the power of the unseen in the Universe and within ourselves, influencing intuition, dreams, your connection with your soul and spirit, and your soul’s connection with the Universe.

Icy blue in colour and even icier in temperature, the coldest planet in our solar system was named for the Roman God of the Sea. Like the sea itself, Neptune represents the subtle yet powerful secrets that lie, as astrologer Judy Hall explains, beyond “the boundaries that keep the soul separate from the whole” of the Universe. The 3 prongs making up Neptune’s glyph (shown above) symbolize the unconscious mind, the conscious mind of “everyday awareness”, and cosmic consciousness.

Like both of his immediate neighbors, Uranus and Pluto, Neptune is considered to be a generational planet. These 3 planets are often referred to as the modern planets or Trans-Saturnians. Since these 3 planets move slower and are much further from the Sun (Neptune takes 10-12 years to move through a single sign), the influence of generational planets is known to impact individuals and generations as a whole. Interestingly, since Neptune wasn’t discovered until 1846, we actually have yet to understand its influence to the same extent that we do with the planets that come before Saturn. This is because, since its discovery, Neptune has yet to travel through all 12 zodiac signs.

That said, if you take a look at Neptune’s transits over the last 4 or 5 generations, you’ll definitely notice a shift in overall attitudes towards the spiritual, the mystic and mysterious, and escapism. For example, from 1958-1969, Neptune was in the emotional, intense Water sign of Scorpio. This time period saw a surge of spirituality, sexuality, and drug use. Coincidence? Probably not.

Neptune is the gatekeeper of the subconscious boundary within the individual Self as well, influencing your ability (or inability) to access or be “in tune” with your subconscious. Whether one is prone to methods of escapism (like consciousness altering substances) is indicated by Neptune’s placement in the natal chart. If you find yourself often lost in vivid daydreams and idealistic imaginings that pull you deeper into your dream life and out of the physical world around you, chances are that Neptune exerts a particularly strong pull over you (here’s looking at you, Pisceans).

What happens when passion, creativity, and the desire to release all that no longer serves you come together in the course of seven days? We’ll find out this week when two major… Read Full Article »

At first glance, you might not see a correlation between astrology and medicine, but it was the ancient Greek astrologers who first developed the concept of medical astrology.… Read Full Article »

It′s that time again, folks! New moon time! Well this time we are taking our moon in a NEW direction. At just over the half-point of March is the arrival of the glorious new… Read Full Article »