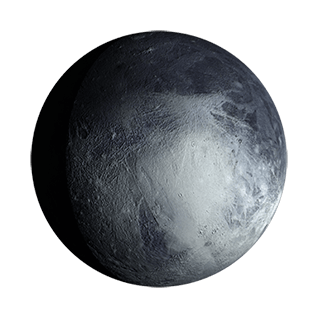 Named for: Pluto, The Roman God of the Underworld

Changes Sign: Every 13-32 years (due to highly erratic orbit)

For those of us who grew up learning about 9 planets, 2006 was a sad year. In 2006, the International Astronomical Union (IAU) officially stripped Pluto of its status as our solar system’s 9th planet. Pluto is now technically classified as a “dwarf planet” because it does not meet all 3 of the IAU’s criteria for planet status:

Plus, if Pluto’s Texas-sized glacier in the shape of a heart is any indication, Pluto never appeared to be particularly upset about his new title.

Tiny Pluto gets a particularly unique view of the solar system from its orbital path through the Kuiper Belt (pronounced kai-per), a doughnut-shaped ring of icy space objects and debris that extends out beyond Neptune’s orbit. He’s also followed around by 5 moons; Charon, the largest of which, is about half Pluto’s size and the reason why the pair are often referred to as the “double planet.” Pluto’s orbit is, of all the planets, the most erratic, and it takes him 248 Earth years to complete one rotation around the Sun. Pluto too is considered a generational planet, like Uranus and Neptune. These 3 planets are often called the modern planets or the Trans-Saturnians. Because these 3 planets move slower and are much further from the Sun, their influence impacts individuals and entire generations.

Since his comparatively recent discovery in 1930, astrologers do not understand Pluto’s influence to the same extent as they do the personal planets, the planets that come before Saturn in the solar system. But, since we can calculate where Pluto has been over time, astrologers can attribute certain characteristics to Pluto by examining it from a generational perspective. In the natal chart, Pluto’s placement is indicative of, in Woolfolk’s words, “the highest and lowest of which mankind is capable.”

For example, Pluto was in Sagittarius, the sign of truth, knowledge, and foreign places, during the Information Age, which the rise of the Internet and social media. Here, we saw an almost total annihilation of traditional, slower means of communication in favour of revolutionary new tools. Woolfolk points out that Pluto not only transformed how information is transmitted, but it transformed the “concept of distance” itself as it enabled humans to connect to one another instantaneously despite geographical space.

Attracting Jupiter in Scorpio - Luck in Love by the Zodiac Sign

Jupiter strikes again! The god of luck, optimism, and generous spirit is switching gears and moving from harmonious Libra to intense and mysterious Scorpio. This is a wonderful… Read Full Article »

One of the most stressful parts of being a human is the power of secrets and the uncertainty of them. One little secret can fracture a marriage, crumble the White House, and… Read Full Article »

What Greek God Are You, Based on Your Zodiac Sign?

If you’re into astrology, you probably already know the basics about your zodiac sign, such as your positive and negative qualities or your most compatible signs. Nowadays,… Read Full Article »

You Pulled the 10 of Pentacles Tarot Card - Now What?
These Are the Transits You Need to Be Aware of for the First Half of 2022
What Does Uranus Direct in 2022 Mean for You?
Like
Follow
Follow