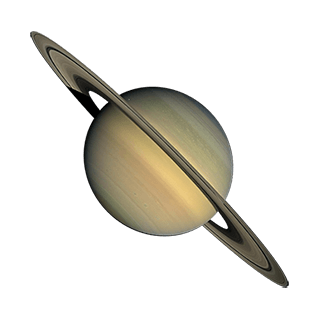 Named for: Saturn, the Roman God of Agriculture

Even though the Sun holds the solar system together, it’s Saturn that keeps a watchful eye over everything. As the planet that rules over responsibility, time, and the law of cause and effect, Saturn influences how we manage, control, and maintain stability in our lives. As the farthest planet from Earth discovered by the unaided eye, Saturn’s presence in our lives on Earth is a strong one.

Saturn commands special attention because of its 7 enormous rings, which are made up of various space debris from tiny dust particles to rocks as large as some of Earth’s mountains. He also has 2 moons, Titan and Enceladus, that may support life due to the possibility of underground oceans. Some of Saturn’s smaller moons (of which there are over 50) orbit in between Saturn’s rings; the gravity of these “Shepherding Moons” being what shapes the rings around the planet, each moving at a different speed. In Saturn’s orbit, there is a place for everything, and everything is in its place. The “Celestial Taskmaster,” as he is sometimes known, wouldn’t have it any other way, as his domain involves boundaries, law, and order.

Saturn often stands in as a symbol for Father Time. Beginnings and endings involve drawing boundaries and placing limitations; thus, the cycle of life and death falls under his rule. He keeps a strict eye on the balance of life on Earth by restricting the areas where Jupiter wants to expand and manifest, keeping the forces and energies in the world stable. Saturn stabilizes our lives as individuals as well, influencing our sense of responsibility, our ability to persevere and self-discipline, our patience, and our tendencies towards optimism, pessimism, or realism. In your individual natal chart, Saturn’s placement indicates the nature of your sense of responsibility and how you handle life’s difficulties and restrictions.

Saturn steps in to oversee the tough job of watching over our “shadow” sides: the parts of ourselves we repress, bottle up, or otherwise hide or avoid. As astrologer Judy Hall puts it, “Saturn stands at the boundary of the known and the known and offers insight that has to be hard won from the depths.”

Saturn recognizes the importance of maintaining the balance of our shadow and light sides - “by accepting [our shadow qualities],” explains Judy Hall, “the soul becomes whole, freed from fear and self-condemnation.”

Has Spring Fever hit you yet? If not, there’s still plenty of time. This week we have the exciting transit of commitment arriving: the beautiful glow of the Sun shining on the… Read Full Article »

The upcoming Mercury and Neptune Water Trine brings plenty of opportunities for us in the realm of creativity and success! With Scorpio and Pisces dominating this trine, anyone… Read Full Article »

Uncover the Mystery of the Full Moon & Lunar Eclipse in Scorpio

A Full Moon Lunar Eclipse in Scorpio is coming! On May 16th, 2022, we have our first Lunar Eclipse of the year, and it’s part of the first Eclipse Season for 2022, coming after… Read Full Article »