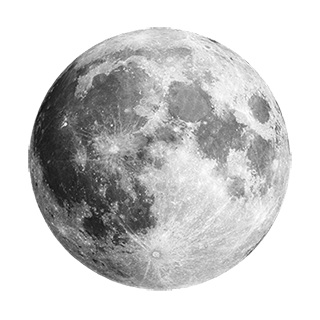 Ruler of: Emotions & the Subconscious

Year Discovered: Known by the Ancients

The Moon is the only cosmic body beyond Earth upon which humans have physically set foot. The Earth and its only Moon have been in a long-distance relationship (384,400 km, to be exact) for millions of years. The Moon’s synchronous rotation, the fact that it rotates at the same rate that it revolves around Earth, means that the same side of the Moon faces the Earth all the time. Coupled with the fact that these two bodies’ gravitational forces tug on one another, stabilizing each other, the Moon will always be Earth’s closest and most intimate neighbor. In the natal chart, the Moon sign is never far from the Sun sign because of its synchronous rotation. The Sun and Moon signs make up 2 elements of the Primal Triad.

It stands to reason that even though there are hundreds, maybe thousands of other moons in the solar system, Earth’s Moon’s proximity to us means it influences humans just as heavily as any of the other full planets.

Despite having no water of its own (or an atmosphere, making it unable to host life), the Moon’s gravity guides the ocean’s tides on Earth. Additionally, humans have “watered” the Moon with 20 seas (maria), 11 bays (sinus), 3 marshes (palus), 20 lakes (lacus), and 1 ocean (oceanus). These “bodies of water” are actually lunar maria, vast plains of dark, volcanic rock that we have assigned rather lyrical names to over the years. You might be familiar with the Sea of Tranquility (Mare Tranquillitatis), where astronauts Neil Armstrong and Buzz Aldrin landed in the Apollo 11 Lunar Module “Eagle” on July 20, 1969.

It comes as no surprise, then, that the Moon represents the fluidity and sensitivity of human emotion, instinct, and the subconscious. The Moon symbolizes “the part of you that you see,” as astrologer Joanna Martine Woolfolk puts it. In other words, the Moon rules the 5 senses and the way you react instinctively to the sensory stimuli of the world around you. The Moon sign explains how we react to and receive the world, while the Sun represents our initiative and the outward actions we take. “The Sun signifies your individuality,” wrote astrologer Evangeline Adams, “and the Moon signifies your personality.”

The Moon part of us guides us as much as the Sun part of us, but the world just doesn't see it. Your personality is the result of your emotions and how you interpret the world, which fall under the Moon’s domain. For example, when you do something for someone because you love them, the other person only sees the action; they do not see the emotions that motivated you to take that action.

The Moon represents femininity and maternity, while the Sun stands for the opposite, masculinity and paternity. Because of this, the Moon is indicative of your past: your infancy, childhood, and memory. The placement of the Moon in your natal chart can therefore be telling of the nature of your relationship with your mother.

How to Be a Boss, Based on Your Saturn Sign

The planet Saturn often gets a bad rap in astrology. Usually, it is classified as the planet of rules and restrictions. Many people get intimidated by upcoming Saturn transits… Read Full Article »

December 9 marks the beginning of Mercury’s transit through the Fire sign of Sagittarius. That’s astrology-speak for finding it much easier to say what is on our minds! This… Read Full Article »

Master Conversations With Mercury in Virgo

If you’ve been feeling like your mind is foggy and confused, get ready for a mental breakthrough because there’s an upcoming transit that will bring more clarity of thought… Read Full Article »

Your Sign’s Weekly Tarotscope for April 4 - 10, 2022
We’ve Waited Over 10 Years to Manifest Abundance with Jupiter in Aries
Angel Number 55 & What It Means for You
Like
Follow
Follow