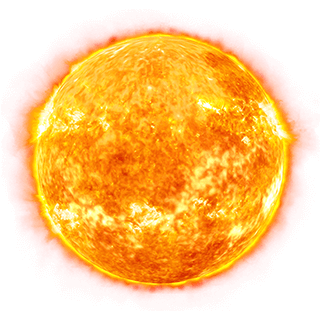 Ruler of: The Self, The Ego, & Consciousness

Year Discovered: Known to the Ancients

4.5 billion years ago, a solar nebula collapsed and our very own Sun was born. Over time, this particular star became the host of its very own solar system. Today, the Sun continues to ensure that the 8 planets and various other cosmic bodies we call our neighbors have a (relatively) stable, safe place to call home in the wild vastness of the Universe.

Besides being the force that keeps the solar system aligned and organized, the Sun is able to hold himself together as a mass of fire and burning gases because of his own gravity. It follows that, in astrology, the Sun represents the life force that holds the Self and all its different parts together. Physiologically speaking, the Sun rules over the cardiovascular system, which includes the heart.

Your core identity and role in life are expressed through the Sun’s placement in your birth chart. Astrologers often refer to the Sun as one of two “luminaries” (the other being the Moon). The Sun essentially determines your personality traits, “shining” on certain parts of you and illuminating them for the world to see. Those certain parts are decided by the zodiac sign the Sun was in at the moment you were born.

Our core personality traits are represented by our "Sun" or, as astrologers say, our "Sun sign."  This is also called our zodiac sign, or birth sign, and is determined by where the Sun was located when we were born. If the Sun is in the Aries constellation at the time of one’s birth, then they likely have Aries traits at the centre of their being. Think of how everything in our solar system revolves around the Sun; in the same way, we as individuals have a centre, a core that defines our unique essence.

Our vitality and resilience in life are ruled by the Sun, motivating the actions we as individuals take in our “search for a unique identity,” as astrologer Judy Hall explains. The Sun determines the nature of a person’s self-expression and creativity.

A Water Sun sign is more likely to be fluid in their self-expression than a stability-craving Earth Sun sign.

That is the role the Sun plays in our natal charts. Every day, the Sun occurs in a specific transit depending on where the Earth and the other planets are in the solar system. Thus, the Sun “shines” in a certain way on certain planets, and that looks a little bit different every day. If the Sun is sextile Jupiter, for example, that would mean the Sun is shining on Jupiter's optimism and luck on that specific day. Similarly, your Sun sign represents the Sun illuminating your best traits.

Scientists have determined that, at 4.5 billion years old, the Sun is likely in its middle-ages. They estimate that the Sun has about 6.5 billion years left before he runs out of hydrogen (his primary element), swells up, and consumes Mercury, Venus, and probably Earth, too. The Sun will then shrink down into a white dwarf star and what remains of the solar system will be released from their orbits to drift away into space.

Greetings, Earthlings, Ah, last week we moved into mysterious Scorpio season! And this week we have some doozies to report. We have a lot going on, and it’s all centered around… Read Full Article »

Love Gets Real With Venus in Virgo

We all want love to be magical and sparkly as much as possible, but life isn’t a fairy tale on repeat. If you want your relationships to go the long haul, you have to know how… Read Full Article »

Mars retrograde ends on August 27th as the planet stations direct. The planet of passion, also known as the god of war, is moving full speed ahead in the most industrious sign of… Read Full Article »