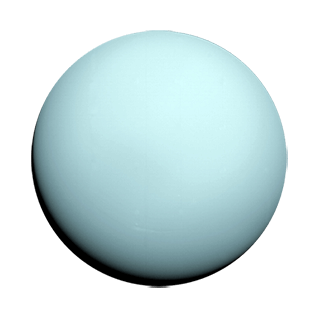 Named for: Uranus, Greek God of the Sky

Spins: Clockwise, on its side

Uranus, the planet that rules over surprise and the unexpected, was a surprise himself. Not discovered until 1871 with the help of a telescope, Uranus was thought to be a comet before being confirmed as a full-fledged planet. Uranus has revealed multiple surprises to us since we’ve been studying him, including his clockwise rotation (the reverse of every other planet except Venus, his corkscrew-shaped magnetic field, his 13 barely visible rings, and the fact that he rotates on his axis almost completely horizontally.

Because of his hypervisible eccentricities, Uranus is the perfect candidate to represent the outsiders and misfits of the world, those whose lives beckon change and revolution. Importantly, Uranus (along with Neptune and Pluto), is considered a generational planet. These 3 planets are often referred to as the modern planets or Trans-Saturnians. Since all 3 of these planets move slower and are much further from the Sun (Uranus takes 7 years to move through a sign), the influence of generational planets impacts individuals and generations. If you’ve ever wondered why certain civil rights issues, rebellions, and revolutions come to a head in the world at particular times, take a look at what sign Uranus is hanging out in for some insight.

Astrologer Joanna Martine Woolfolk explains that, in the individual’s natal chart, “Uranus is a deep-seated energy within the personality, an unconscious purpose that is revealed over a lifetime.” Uranus will surprise you constantly, unveiling sides of you that you didn’t know you had at. How comfortably you fit into society - how “normal” or “unconventional” you are as a person - can be determined by the placement of Uranus in your birth chart.

It is also helpful to consider the quality of the Uranus sign in your birth chart:

The planet of the future, Uranus is always looking forwards and shaking up the order of things where he sees fit in order to allow a balance of stability and growth on Earth and within you as an individual. Any new person or experience that gets introduced into your life is thanks to Uranus, whose influence teaches us flexibility, adaptability, and the importance of change for growth and progress.

Get Inventive in Love With Venus in Aquarius

We are currently shimmering through futuristic Aquarius season, and our minds are like the chrome-infused music videos of the late 1990s, shining with possibilities and fresh… Read Full Article »

On July 11th, Mercury enters Cancer, and here we see the planet that rules Virgo and Gemini soften somewhat as it moves into the sign of the crab. What does this mean for us?… Read Full Article »

How Mercury Will Affect Us in August 2020

Have you heard about Hermes The Messenger and The Trickster? Better known to us as Mercury, he was the only Olympian able to travel between the land of the living and the land of… Read Full Article »