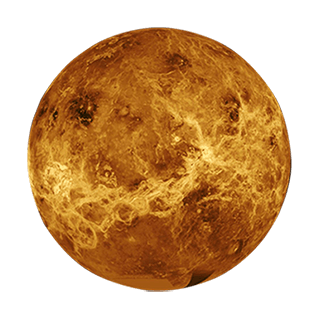 Named for: The Roman Goddess of Love and Beauty/Greek Goddess Aphrodite

Bringing a healthy dose of femininity to the solar system is hot-headed Venus! Although she’s second closest to the Sun, Venus plays second to none; her thick, cloudy atmosphere traps the Sun’s heat and makes her the hottest planet in the solar system. That said, some evidence suggests that before she hit 2 billion years old, Venus may have hosted a shallow ocean of liquid water! You’ll also find mountains and volcanoes on Venus.

If you’ve ever had a particularly long day, don’t complain to Venus, whose days are actually longer than her years. This is possible because she spins clockwise on her axis, the opposite direction of the rest of the planets (with the exception being Uranus). Still, she remains the biggest and brightest fixture in the night sky (after the Sun and Moon of course); her bright light has captivated us Earth-dwellers for centuries.

Venus has had a pull on humans for as long as we’ve been stargazing. It’s no surprise that she’s known today as the planet of love, beauty, and pleasure, named for the Roman Goddess of Love and Beauty by the same name. Depending on Venus’ placement at any given time, we on Earth will feel her influence in our relationships, our attraction to others, our own feelings of desirability, how we express our affections, and our responses to the arts and all that is beautiful in the world.

In the natal natal chart, Venus determines how an individual feels and expresses love, the types of people with whom we have natural harmony, and the health of the self-esteem. “Venus is sensuality, the capacity to enjoy gratification of the senses, and to indulge the body,” Judy Hall explains. This is the reason why Venus governs the things we spend our money on in pursuit of that sensory gratification. In other words, if you have expensive taste or problems with impulse control, you can probably look to the placement Venus in your birth chart for an explanation! Venus is famous in mythology for “stealing the wits of the wise,” allowing pleasure to take precedence over self-discipline.

enus in the Elements:

Full Moon in Cancer: Home is Where the Heart is for the Holidays

It’s Full Moon time again, and we are being given a very special gift this year. It is the gift of a Full Moon on Christmas Day! And even more special is the gift that this Full… Read Full Article »

Saturn Direct in Capricorn: Move Forward Like a Boss

Saturn turns direct on the 29th September and this is good news for many! The planet of discipline and hard work turns direct in Capricorn. Saturn feels most comfortable in… Read Full Article »

How to Succeed as a Capricorn

Capricorns are the tenth sign of the zodiac, and are symbolized by the goat with the fish tail. Ruled by Saturn, Capricorns appreciate stability and routine and are excellent at… Read Full Article »