Runes are possibly one of the most enigmatic divination tools. The word rune comes from the Norse word runa, which means ‘secret.’ They’re gaining a strong following, partially because of the Vikings television series and documentaries which are popular at the moment. No one really knows the exact history of the runes, or what they were used for. What we do know is this: 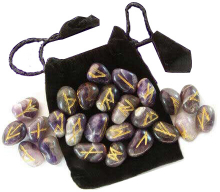 Here at Astrology Answers, when we discuss runes, we’re referring to the Elder Futhark. Like the tarot, there’s a set natural presentation for the stones. In fact, the Elder Futhark gets its name from the first letter of each stone in the first Aett, or line, of the stones as they’re laid out in their proper order. Just as you’d shuffle tarot cards before doing a layout, you’ll also mix up your rune stones, usually by putting them in a bag and shaking it before you draw out the stones one at a time. Then you’ll place them in the positions of the spread you’re using, and start to interpret their meanings.

Runes aren’t usually quite as kind as the tarot when it comes to their meanings. Many of them are cold, and quite severe. There’s also less room for speculation with the runes. The images on the tarot might relate to many things, but this is not the case with runes. Some of them mean the same upside down as they do right side up, because of the pattern in the glyph. Runes aren’t hard to learn and they aren't hard to use, but like other tools, they take a lifetime to master.

There are slight variations between the sets of the Elder Futhark. Some contain a blank rune, but this is a modern addition and one that serious runesters mock. There are differences in the style of the staves with some being more curved or elongated than others. There are also some differences in pronunciation, which could be attributed to the different Nordic dialects The most drastic difference is that sometimes the order of the last two runes in the third aett is switched. There’s no established right or wrong way. It’s up to the runester to discern.

Runes can be made of many different materials. There are those who prefer the symbols to be burned into disks of wood. Some people paint pieces of wood, small stones, or even the flat glass marbles that are used in floral displays. Polymer clay runes are popular because they’re hardwearing and easy to make. I even know a potter who makes runes and witch stones out of clay fired in a kiln.

Some rune sets are laser carved into semi-precious stones, like amethyst or carnelian or rose quartz. People who are serious about embracing the mystical side of life will often choose to use these. The reason is that you get the energetic properties of the stones coloring the symbols of the runes. For example, amethyst is a gentle and a spiritual stone. It’s believed that runes carved into amethyst might have a gentler energy, and give a less harsh reading, than runes on a more somber material.

If you’ve not explored doing rune readings, we highly encourage you to give it a try. You’re walking with the ancestors when you do this, touching the mysticism of another culture and another time. It’s fun to handle the stones and pull one out for a quick reading to get an immediate snapshot of what’s going on in any particular situation. You might want to make a special bag or box in which to keep the stones when they’re not in use. Like any other tool, it’s up to you to find your own way of working with them. You’ll be surprised at what they have to say!

It’s always intriguing to discover a new form of divination; after a while, using the same tools over and over again can start to feel a little predictable, or maybe isn’t… Read Full Article »

Ask Charla: Can Runes Tell Me More About My Future Than Tarot?

Welcome to another edition of ‘Ask Charla.′ You know, here at Astrology Answers I get a lot of questions from all corners of the globe; things to do with love and romance,… Read Full Article »

You Need These 6 Divination Tools for Love

Divination tools are booming in popularity in recent decades as people have begun to refer to them for anything from self-growth to future curiosities… and, of course, love and… Read Full Article »

Are You Ready to Become a Better Lover with Venus in Aries?
Your Sign’s May 2022 Tarotscopes
How to Embrace Change with the New Moon in Gemini
Like
Follow
Follow