May 16, 2022 - We’re in the midst of eclipse season, Taurus, and since the karmic Nodes are currently moving along the Taurus-Scorpio axis, you are going to be on the receiving end of these vibrations. Things go into hyperdrive on the 16th when the Scorpio Full Moon lights up the skies, doubling as a potent Lunar Eclipse. Eclipses are like Full Moons on steroids, so get ready for some major changes; since this one will be impacting your relationship sector you can expect a partnership–or lack thereof–to get thrown into the spotlight. You and a partner could decide to make it official, or, on the flipside, you could decide it is time for the two of you to go your separate ways. Only time will tell, Taurus, so wait and see. There are some rather confusing angles attached to this lunation, so try not to make any major decisions in the days following, as it is always best for the dust to settle in the wake of eclipses before striking out in any particular direction.

Only a few days later, on the 19th, the Sun in your sign and your expressive 1st House will form a powerful trine with alchemical Pluto in Capricorn and your 9th House of expansive. A creative project or budding passion could get brought onto the global stage, as major transformation is highlighted at this time. Don’t be afraid to step out into the spotlight, since the audience will be especially supportive. Connection from foreign lands or highly educated people could come in handy right now, so look beyond the horizon.

It’s time to wave goodbye to your birthday season on the 20th as the Sun slips into Gemini and your grounded 2nd House of earned income and material possessions for the next 30 days. This annual transit is all about getting your life figured out and making sure you’re comfortable in whatever way that word might apply. This is a terrific time to get your finances sorted, so if you’ve been feeling a little off kilter lately (which is totally possible given the current state of things) the Universe is offering you a chance to get back to basics and make sure you’re prepared for whatever it is that might come your way.

Things close out on a high note on the 21st as the Sun aligns at the exact same degree as messenger Mercury, currently spinning backwards through Gemini. This is a terrific time for you to get down and dirty and deal with your finances without having to struggle too much since the Universe will be pointing your nose towards the grindstone and telling you to get to it. You might receive word that a long-standing project is finally receiving a much-needed green light, or perhaps you catch wind of a new opportunity to increase your net worth. Even if you can’t talk to people face to face don’t be scared to ascend to the air waves and put your message out on social media; with Mercury here, the squeaky wheel gets the grease, so be sure to squeak rather loudly. That being said, Mercury is currently retrograde until early June, so you’ll do better dealing with old projects and financial matters as opposed to chasing after anything new. 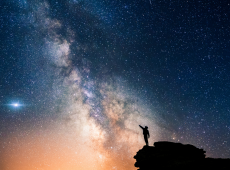 Do you have any buried feelings that need to be revealed or creative ideas that are begging for your attention? Then the stars are here to help you release and move forward… Read Full Article »

Behold, Earthlings! It’s July! The seventh month of the year has arrived, which is a powerful month. Not only are we well past the halfway point of 2019, but the number 7 in… Read Full Article »

Take a big, long breath of that Fall fresh air! It’s a new season! And with the Autumn Equinox in full swing, and the holidays just…gasp…a few short months away, there is… Read Full Article »

What to Expect in Adventurous Sagittarius Season

It’s that time again, folks! Sagittarius season is upon us, meaning that the warm Sun will be moving into this fiery sign and shining the optimistic light of Sagittarius on all… Read Full Article »

How to Stay Cool, Calm, & Collected with Mercury in Gemini
You Need These 6 Crystals for Gemini Season
Discover Your Deepest Sexual Desires with Mars in Pisces
Like
Follow
Follow